Just a few pictures I took on my run today on the exercise trail at the Barnesville Park. For those of you in town, I’ve never seen the trail in better condition, so if you want a nice walk in the woods as the leaves continue to turn, get out to the park.

Open Letter to the Deer I Almost Stepped On

I wanted to take this opportunity to apologize for almost stepping on you last week as I was taking my run through the park. It was not my intention to startle you in such a way; I was simply going for a jog, and did not mean to disturb your afternoon nap.

Likewise, I’m sorry that, after you sprang up to run away, I screamed at you and made those ‘Kung Fu’ motions with my arms and legs. While I am sure that you were further alarmed by me doing this, it was simply a result of you startling me as well.

I realize that while I often run through the woods there, it is your home, and there is no excuse for frightening you the way that I did. I would consider it a great inconvenience if you were to barge into my living room, so I can imagine how such an intrusion must have made you feel.

Again, I’m sorry for showing up so abruptly. It’s probably of little consequence, but you may take some comfort in the fact that the encounter almost made me crap myself, too.

Hoping to see you again soon, although from a slightly greater distance, 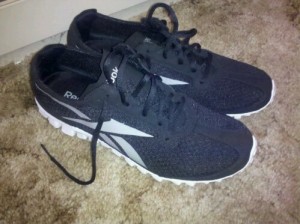 So, I was way overdue for a new pair of running shoes. My previous pair was no longer comfortable when walking, let alone running. After thinking about it for a while, and deciding that I wasn’t quite ready to take a complete minimalist dive into Vibrams, I decided to buy a pair of Reebok Realflex.

I wore them around the house a bit this morning, and out of the box, they are more comfortable than walking around barefoot, and they are super light. So I took them for a 4 mile run, and am really satisfied so far. Hope I’m a happy with them on mile 500.

I tried to make it a pretty eclectic list, ranging from adventures, relaxation, physical and mental self improvement, relationship building, and giving back to others. Nice and well-rounded. So, without further ado, here is my 2012 to do list, which I’m creatively calling my “Twelve for Twelve.”

Starting off with a simple, but exciting one. I’ve wanted to go zip lining for several years, and have never taken the time to just go do it. It looks like a blast, and I’m told that it is. If anyone is interested in joining me on this one, let me know. I’m thinking late spring in Hocking Hills area, but could be somewhat flexible.

But not all at once, of course. Sounds like a big number to me, but it when I did the math, it would only be an average of just under 1.4 miles per day. I guess I can do that. Those two zeros still look pretty daunting, not to mention that I’m already 15 miles behind pace.

I’ve been developing WordPress themes for clients now for just over two years, but I’ve never released any for sale. Could be a good way to expand 10T’s business a bit. So in any spare time I have with the business this year, I’m going to spend working on a dozen.

What could be more New Year’s Resoluton-esque than to dive into something completely new, right? Whenever Java’s been around, I’ve always stood on the other side of the room. Time for the two of us to get to know each other.

And speaking of diving into something new and uncomfortable, add Drupal to the list as well. I’ve always been a WordPress guy, but acknowledge that Drupal must have benefits of its own. Time to find out for myself what they are.

I mentioned when I started this blog that I didn’t know why I was starting a blog when I had never really been all that committed to them in the past. Still, I want to give it an real effort to see if I can keep it up for a whole year. It’s only a little over 100 posts. Easy, right?

For those of you who know these two girly-girls, you might find this one a little funny. This one could quite possibly be the most challenging of the twelve, because I actually have to convince them to go first, which will be the hard part. The actual camping will be the easy part.

I’m no good a fund raising, and public speaking makes my knees shake. But I can design web pages, so I’m looking to volunteer in a way that would actually be beneficial to the group that I’m volunteering for, specifically, for small South-Eastern Ohio non-profit organizations. If anyone out there is part of one that is looking to have a website, please let me know. First come, first served.

#9 – Say “Thank You” to Anyone in Military Uniform

Whenever possible and especially if I don’t know them. I know that this isn’t why these guys and gals do it, but if you’ve ever just walked up to a member of the military, and given them a smile and a “Thank You,” you will see how much that simple act means to them, and they don’t get to hear it nearly as often as they deserve.

Thanks to the fantastic Christmas present from Julie, I really think that home brewing might just be my new hobby, and I want to give it a good chance to be so. I figure that if I’m as interested on the fifth batch as I am on the first, new hobby found.

Hiking for me is extremely relaxing, mentally clearing, and just generally gives me that warm fuzzy feeling. And I didn’t hike a single step in 2011. That simply has to change. Thirty miles of hiking isn’t that ambitious of a goal, but it’s a lot further than none at all.

Last but not least, a simple pleasure. I haven’t seen this happen in ten years. That’s an unacceptable length of time.

So, there they are. Twelve for Twelve.